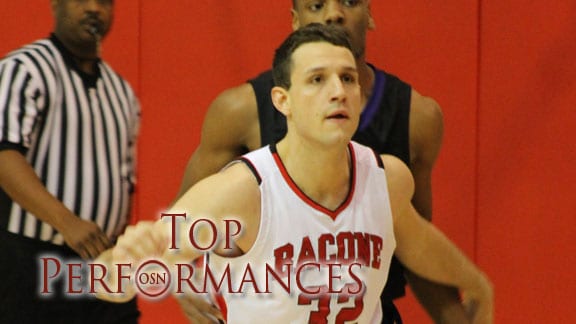 Another basketball season is in the books and there were some great performances – both single-game and season-long – from men’s basketball players in the state of Oklahoma.
Here’s our top 10 list.

No. 10 – Korey Billbury, Oral Roberts
In the middle of the Golden Eagles’ longest win streak of the season, the junior stepped up big in a win over Omaha. Billbury put up 34 points with seven rebounds and five assists in front of the home crowd to help his team to a 102-86 win.

No. 9 – Southeastern Savage Storm
The Tulsa Golden Hurricane should have made it into the NCAA Tournament [Ed. Note: our opinion], but sometimes a bad loss stands in the way. Southeastern’s 69-66 victory over Tulsa in November may have been that bad loss. To the D-II Storm’s credit, it didn’t back down from the D-I Hurricane, shooting 49 percent from the field and 48 percent from behind the arc, while holding Tulsa to just 35 percent shooting. Danny Powell and Taylor Smaller had 19 and 18 points, respectively. (It wasn’t Smaller’s biggest game, though, as he scored twice that many against East Central.) 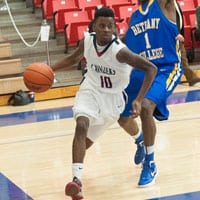 No. 8 – Marty Wilkerson, St. Gregory’s
Wilkerson finished the season as the No. 8 scorer in the NAIA for the year. The Second Team NAIA All-American scored in double figures in the first 12 games of the season, including a season opening 91-79 win over Evangel. Wilkerson’s effort included accounting for more than half of the team’s offense with 34 points and seven assists.

No. 7 – Sterling Thomas, East Central
In Novermber at Henderson State, Thomas put up 36 points, the most scored in a Great American Conference game this year. (Smaller matched that number against him in Feb. – See No. 9) The All-Central Region Player also recorded seven steals in the 88-75 win.

No. 6 – Semar Farris, Mid-America Christian
The Sooner Athletic Conference Player of the Year and First Team NAIA All-American had stats that were a model of consistency for the Evangels. This was definitely exemplified in a pair of wins over the weekend in mid-February. Farris had 26 points in both games and hit five three-pointers against John Brown and six against USAO. He was 11-of-17 behind the arc in the two games combined and averaged 4.5 steals as well.

No. 5 – Southwestern Bulldogs
It’s not over until it’s over. Southwestern trailed East Central, 55-49, with 27 seconds remaining. The Bulldogs then rattled off three three-pointers as a part of a 9-2 run to close the game and won, 58-57. Kenyan Borders hit the game-winner with 2.7 seconds left. Two nights later, Borders scored 23 points and the game-winning free throw with 2.0 seconds left to give SWOSU an 82-81 win over Hillsdale Baptist.

No. 4 – Bryon Miller, Oklahoma Baptist
The junior had a monster game in what would be the final win for coach Doug Tolin with the Bison. Miller put in 29 points – shooting 55 percent from the field and 40 percent (4-10) from long range – and brought down 18 rebounds in the 85-79 upset of No. 14 Wayland Baptist.

No.3 – Buddy Hield, Oklahoma
Hield went off against Oklahoma State in the first Bedlam game of the year and to say he couldn’t miss would be close to an accurate statement. He scored 27 points on 10-of-10 shooting from the field, including 4-of-4 from behind the arc. He was only 3-of-5 at the free throw line, but who’s counting in an 82-65 home Bedlam win in which he also had five rebounds, two assists and two steals. 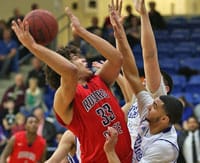 No. 2 – Frederico Santos, Rogers State
The Hillcats’ first Division II conference Player of the Year had 16 double-doubles on the season and in fact averaged a double-double for the year, with 13.8 points per game and a school record 11.0 rebounds per game. Santos had 17 boards twice and at least 15 six times. He led the team to 12 wins in the last 14 games and a second place finish in the Heartland Conference.

No. 1 – Matt Qualls, Bacone
Qualls averaged 26.0 points per game and led the NAIA in scoring and garnered recognition as a Third Team All-American. The senior’s best games came near the end of the season as he scored 108 points in a three-game stretch over five days. Qualls peaked with 47 points – the most scored by any Oklahoma college player this season – and 19 rebounds in a close loss to LSU-Shreveport. The effort for the week earned him National Player of the Week honors.

And without question, Honorable Mention goes to MACU coach Willie Holley. Although he has said, “I tell everybody that I haven’t made a point in any of these victories. It’s all been players. So I haven’t won a ballgame. It’s about the players and the kids and the things they have contributed to reach this milestone.”
Coach Holley amassed 813 wins in 42 years on the sidelines at Mid-America Christian and closed his final campaign with a regular season Sooner Athletic Conference championship and a trip to the NAIA Quarterfinals.