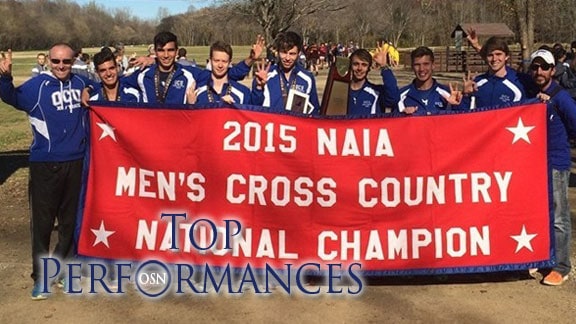 As in any year, there are more great moments than just 10. (Actually, it might be pointless to have a top 10 if there were only 10. But anyway…) We will post the Top 10 of 2015 later in December.
Here is a look back at some of the other memorable moments in Oklahoma college sports during 2015.

And you can vote for your favorite moments HERE.

The Aggies opened the season with 13 straight wins. Quite a start! One of the things that made it even that much more impressive was the makeup of the roster: 1 senior (Kat Evans), 1 junior, 2 sophomores and 12 freshmen. If this group can stay together, the future could be very bright in Lawton.

Coming off an 8-4 season in 2014, this year looked rough for the Bronchos when they started 0-4. But then things turned around with the emergence of running back Clay McKenzie, the All-OSN Offenisve Player of the Year, and some defensive adjustments. UCO finished the season winning seven of its final eight games, including a bowl win over rival Southwestern in the Live United Texarkana Bowl and ended with another winning campaign at 7-5.

At 31-5, the Bronchos recorded the second most wins in a season in school history. In the middle of that was a 16-match winning streak, a school record as well. UCO earned an at large bid to the NCAA Tournament and won its first round match.

What an amazing career MACU head coach Willie Holley had. He served as the athletic director at Mid-America Christian, as well as the coach for other sports, but mainly as the men’s basketball coach, a position he held for 42 years. Holley’s final season was one to remember as well – a season record of 25-11, a trip to the NAIA national quarterfinal and ending with an overall career win total of 813, second most in NAIA history.

The Sooners had key moments in earning a spot in the College Football Playoff. Among those were the rally in Knoxville to come back from being down 17 early and tying the game in the final minute of regulation, then winning in double overtime, 31-24, over Tennessee. And capping the regular season, OU made another statement on the road, this time with a 58-23 beatdown of Oklahoma State in Stillwater.

In their season with a full Division II schedule, the Lady Bison made some noise. They finished with a 27-13 record, went 12-2 in the GAC, were the runners-up in the NCCAA national tournament, and senior libero Kaitlyn Lucy set an NCAA record for digs in a single season, with 978 in 153 sets, averaging 6.39 per set.

The Lady Bison ended their NAIA days in style. OBU went 27-6 overall and were undefeated at 16-0 in the Noble Complex. OBU came up just short of a trip to the Fab Four, falling 83-81 to Westmont College in a triple-overtime thriller in the NAIA national quarterfinal. 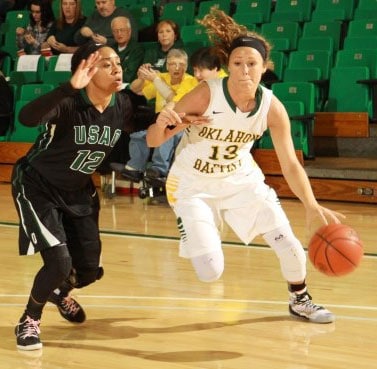 It wasn’t just the women’s basketball team that went out of the NAIA in style – the entire athletic program made a final statement. The Bison collected their third consecutive Learfield Sports Directors’ Cup, the award given to institutions for achieving success in many sports. With 854.50 points, OBU finished ahead of Lindsey Wilson and Oklahoma City for the honor.

Three straight national championships! There doesn’t seem to need to be more to say. And the Stars blew away the competition. The Stars tallied just 78 points, which was 90 points better than second place Saint Mary (Kan.). Arya Bahreini, a senior from Edmond, finished third overall and David Mountford finished fifth individually.

This story isn’t yet complete, but the beginning of it is impressive. The Hillcats have opened the 2015-2016 season with nine consecutive wins. The season opened with a win over No. 18 Metro State, 71-50. In the most recent victory, RSU doubled up Hillsdale Baptist, 98-49. And the Hillcats already have a Heartland Conference win with a 75-72 win over Dallas Baptist. The ceiling for this season looks to be high.
* Update: The record is now 10-0 following a Hillcat rally to defeat UAFS, 100-95, on Thursday.

It was a turnaround year for the Bulldogs. OSN’s Coach of the Year, Dan Cocannouer, led SWOSU from three wins in 2014 to eight in 2015, with challenges on and off the field. Southwestern won the final six games of the regular season to finish in second place in the GAC and went to the Live United Texarkana Baowl as a reward. It was the first Division II postseason appearance for the program.

The Lady Dawgs put together the best season in program history. SWOSU finished at 22-12, which was the first winning season in Weatherford for volleyball. Southwestern also became the first No. 3 seed to win the GAC postseason tournament and earned a trip to the NCAA Tournament.

Coach Jimmy Hampton led both teams to stellar seasons. Each team earned a bid to the NAIA national tournament. And the teams combined to dominate the Sooner Athletic Conference – the men went 9-0 in league play and the women were 8-1. Rhiannon Brewster was the All-OSN Women’s Soccer Defensive Player of the Year and Liam Madden was the All-OSN Men’s Soccer Offensive Player of the Year.