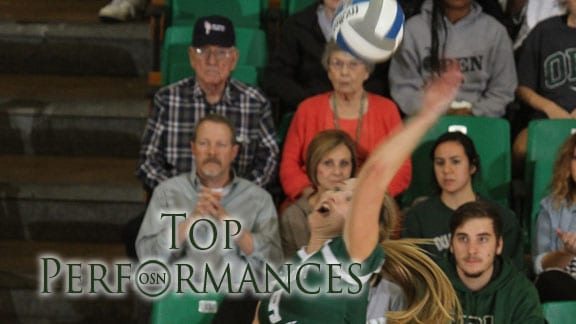 The 2015 season is just about in the books with a couple of D-II teams in the NCAA Tournament and OU’s schedule winding down.
Here’s a look at the top 10 volleyball performances for November 2015:

No. 10 – Cristina Viera, sophomore, Cameron
Cameron took the season sweep over Texas A&M-Commerce with a 3-1 win, in which Viera had 34 digs and three aces.

No. 9 – Lucija Bojanjic, sophomore, Oral Roberts
Bojanjic started the month strong with a big double-double against IUPUI. The sophomore had 69 assists and 10 digs in the five-set loss. 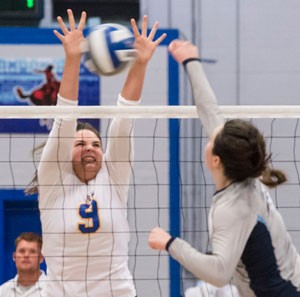 No. 8 – Abby Jameson, freshman, Southeastern
Jameson ended her first collegiate season on a high note. The Savage Storm fell, 3-1, to the GAC regular season champion Arkansas Tech, but Jameson had a double-double of 21 kills and 16 digs.

No. 7 – Heather Watson, senior, Oklahoma City
The Stars made it to the SAC Tournament final, sweeping their first two opponents, MACU and Texas Wesleyan. Watson recorded 72 assists, 17 digs and three aces in the six sets.

No. 6 – Abbey Bell, junior, Southern Nazarene
Bell seemed to be everywhere on the court for SNU in the quarters and semis of the GAC Tournament. The junior had 54 digs through seven sets for a 7.71 dig/set average.

No. 5 – Kierra Holst, junior, Oklahoma
Oklahoma swept three straight Big 12 opponents in mid-November. Holst led the way with 43 kills in those nine sets – a 4.78 kill/set average – and is hitting .419 over that stretch.

No. 4 – Barbara Jackson, senior, Central
The senior has led her team to a 30-win season so far and the Bronchos will be playing in the NCAA Tournament. UCO lost in the MIAA tournament final to No. 8 Central Missouri, 3-1, in a hard-fought match in which Jackson had 33 kills in four sets – an 8.25 kill/set average.

No. 3 – Kayla Hebert, junior, Southwestern
Hebert led the Bulldogs to their first-ever tournament championship and an automatic bid in the NCAA Tournament. In the GAC final, a 3-1 win over Southern Arkansas, Hebert had 42 assists, 27 digs and four kills in the four sets.

No. 2 – Carrie Strong, senior, Oklahoma Baptist
Strong nearly recorded a triple-double in the NCCAA Central Region championship match. OBU fell to Colorado Christian, 3-2, but received an at-large bid to the NCCAA national tournament. Strong had 21 kills, 19 digs, and eight assists in the final.

No. 1 – Hannah Luedtke, senior, Mid-America Christian
Luedtke won her final match in a MACU uniform, a 3-1 victory over Central Christian in NCCAA Central Region pool play, and she went out with a strong finish. The senior put up a triple-double with 10 kills, 38 assists and a career-high 27 digs. And that in just four sets.