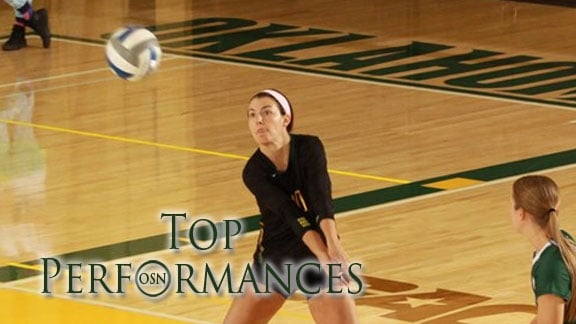 It’s time to look at the top 10 performances and performers in college football for the month of October.

No. 10 – Tory Sharp, senior, Southwestern Christian
Sharp recorded 18 kills and 21 digs for a solid double-double in a 3-1 win over John Brown.

No. 9 – Tori Leisure, senior, Oklahoma City
The senior is hitting well, at a clip of .385, and at times higher. Leisure hit .405 during a four-match stretch in October in which the Stars went 3-1 and she averaged 15 kills per match.

No. 8 – Tori Luckenbill, freshman, Cameron
After opening the season with 13 wins, the Aggies lost six straight, but stopped that streak with a win over West Texas A&M, the first win over the WTAMU since 1998. Luckenbill had an all-around match with 46 assists and 26 digs on the evening.

No. 7 – Julia Benford, junior, Southeastern
Benford had a career-high 22 kills in the Storm’s sweep of Arkansas-Monticello and did so hitting well. She had only two errors in the three sets and hit .645 on the evening.

No. 6 – Carly Zak, junior, Southwestern
Zak had a season-high 20 kills against Ouachita, 14 digs and a career-high seven blocks on the Lady Tigers, the GAC’s top offensive team. With those kills, the junior crossed the 1,000-mark in career kills at SWOSU.

No. 5 – Katy Davis, junior, Central
It was a five-set thriller for the Bronchos as they came back to win their 15th consecutive match (the streak rose to a school-record 16) and Davis led the way. The junior middle blocker had a season-high 55 assists and threw in seven digs and a kill, as well.

No. 4- Elyse Berlin, sophomore, Southern Nazarene
Berlin narrowly missed her first triple-double in a five set loss to Midwestern State. She did set one personal mark, however, with a career-high nine kills, to go with 38 assists and 21 digs.

No. 3 – Kaitlyn Lucy, senior, Oklahoma Baptist
Lucy is playing defense at a pace of 6.41 digs per set for the year, with that number improving to 7.09 in October. The senior is third in Division II in digs per set and had 40 at Southern Arkansas, the most in a match in GAC this year.

No. 2 – Heather Watson, senior, Oklahoma City
Watson led her team with an incredible and career-high 61 assists in a five-set loss at Wayland Baptist, which stopped the Stars’ 11 match winning streak. The senior added six digs on the evening.

No. 1 – Laura Milos, sophomore, Oral Roberts
Milos’ numbers this season have been on record pace and continue to be strong. She crossed the career 1,000-kill mark on Nov. 1. The sophomore is averaging 5.28 kills per set for the season and during October that rose to 5.68. Milos just earned her fifth Summit League Player of the Week award, a league record for one season. She closed the month with six straight matches in which she totaled at least 22 kills, highlighted by a 27-kill, 17-dig performance in a four-set match against South Dakota.