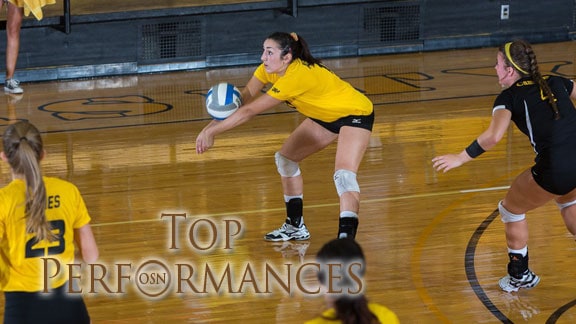 We hit the midseason for volleyball in 2015 and here is a look at the top 10 performers and performances in September.

No. 10 – Ashlyn Broussard, junior, St. Gregory’s
St. Gregory’s has played 11 matches this season, but Broussard’s numbers in serving go beyond that. She has 28 aces, playing in just 35 sets and in No. 4 in the NAIA serving with an .800 percentage.

No. 9 – Courtney Traylor, sophomore, Southwestern Christian
Traylor twice in September had matches with 50-plus assists, including 53 in a four-set win over Central Christian (Kan.).

No. 8 – Nora To’omalatai, junior, Northwestern
The junior is third in the GAC in points (4.21/set) and fourth in kills (3.76/set). To’omalatai had 21 kills against Fort Lewis College.

No. 7 – McKenna Qualls, junior, Southern Nazarene
The junior transfer is having an impact on an already solid Crimson Storm team. She is averaging 2.97 kills per set and 3.62 points per set. But she has 28 service aces in 58 sets on the season and is a threat every time she touches the ball.

No. 6 – Hannah Mitchum, senior, Oklahoma City
Three times already this season, Mitchum has been named the Sooner Athletic Conference Setter of the Week. She has helped her team to a 10-3 record and the Stars are undefeated in league play. Mithcum posted 51 assists and five kills against Northwestern (Ia.).

No. 5 – Alyssa Benson, sophomore, Southeastern
The sophomore from Edmond is averaging 9.12 assists per set for the month. Benson came alive for the Storm as Southeastern won its first two conference matches of the season against ECU and SWOSU and she delivered 87 assists in seven sets for a 12.42 average.

No. 4 – Carly Zak, junior, Southwestern
The “Zak Attack” helped to lead Southwestern to a 3-0 start in GAC play. Zak in second in the league with 3.84 kills and at the top of the list recording 4.32 points per set. She had double-digits in kills in nine straight matches and five double-doubles in the month.

No. 3 – Kaitlyn Lucy, senior, Oklahoma Baptist
Lucy is averaging a league-leading 5.90 digs per set for the season. She averaged 7.57 in the last week of the month in wins over Southeastern and rival Southern Nazarene, helping her Lady Bison to remain undefeated in their first season playing in the GAC. Lucy is also one of only three players in the conference to have at least 20 service aces.

No. 2 – Katy Davis, junior, Central
Davis is averaging 11.09 assists per set on the season and has 10 aces. The junior was named Specialist of the Week in the MIAA in September for a performance that helped her team to three wins, with 11.8 assists per set in those games, along with 23 digs, seven blocks and six kills. UCO is up to No. 14 in the D-II poll.

No. 1 – Cristina Viera, sophomore, Cameron
Viera is one of a number of Aggies who could have made the list this month. Cameron finished September at 12-0. Viera had a record-setting performance against Southern Nazarene. The sophomore had 45 digs as the Aggies rallied from 0-2 to defeat the Crimson Storm and preserve the undefeated record. She posted three service aces in the match as well.