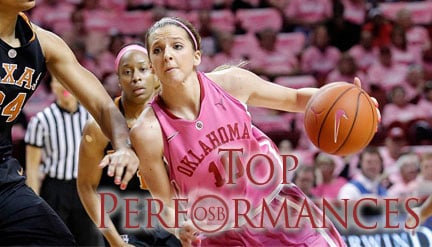 There were so many great performances in February as the regular season is winding down.  It was tough to get it down to 10.  And I think we still added an extra one…

No. 10 – Liz Donohoe, Oklahoma State
OSU avenged a loss at Norman with a 73-57 win over the Sooners in Stillwater.  Donohoe had a big performance for the home crowd, leading the way as one of five Cowgirls who scored in double figures and put up a double-double with 15 points and 11 rebounds.

No. 9 – Emily Williams, Southeastern
Williams put on a great show in a Monday night makeup game at Arkansas Tech.  And although the Savage Storm didn’t pull out the win, it was not for a lack of effort.  Williams had a career-best 30 points – also a season high for SOSU – and 11 rebounds on the night.  It marked the ninth 20-point outing for Williams on the season, a conference high.

No. 8 – Kamera Bozeman, Northwestern
It took an extra five minutes for the Rangers to stop a six-game slide.  NWOSU got a career-high 33 points from Bozeman – one third of the team’s points – in a 99-97 overtime victory at Henderson State.  She added seven rebounds along the way, playing in only 25 of the 45 minutes of game time due to foul trouble.

No. 7 – Chelsea Stamp, Cameron
The record Stamp set last year for three-pointers in a season was broken in February – by Stamp herself.  She went 5-of-6 from behind the arc in the Aggies’ 83-69 win over Texas A&M-Kingsville, bringing her total for the year to 67, two more than the previous season high at the school.  She finished the month with 71.

No. 6 – Morgan Hook, Oklahoma
The Red River Rivalry has been tight this season.  The Sooners avenged January’s overtime loss to the Longhorns with a 64-63 win at home in February.  Hook put together a performance that was nearly a triple-double with 15 points, nine boards and eight assists.  She also sealed the deal for OU, as she was fouled on the game-tying layup and with four seconds left hit the accompanying free throw to give her team the final one point margin of victory.

Nos. 5 – Sarina Sayama and Michelle Fisher, Southwestern
The seniors had big games in February and because they were seniors we hated to leave one out.
Sayama set the conference record for three-pointers in a game, making nine of 15 against Southeastern, while scoring a career-high 33 points in the 99-71 win.  It was part of a week that would net Sayama her third GAC Player of the Week honor in 2013-2014.
Fisher closed out the home portion of the schedule helping her team remain undefeated in the new Pioneer Cellular Event Center.  She scored 25 points in the first half and shot 5 of 7 from long range on the night and tied her career high putting in 31 points in a 101-66 victory over Southern Nazarene on Senior Night.

No. 4 – Christian Key, Oral Roberts
The senior had 17 points and eight assists against Southeastern Louisiana, but her biggest shot came at the buzzer.  Key put in the game-wnner from 35 feet with a defender on her tightly to give the Golden Eagles an 81-78 win over the Lady Lions in conference play.  It was her first three-pointer of the game and first last-second shot for the win of her career.

No. 3 – Ashlee Ferguson, Mid-America Christian
Another player with nine made three-pointers in a game, Ferguson had 40 points in a 90-75 win at St. Gregory’s.  The overall point total set a record for the Lady Evangels since joining the NAIA and the nine from long range and 15 total made field goals are new records at MACU.  This was part of stretch that saw Ferguson receive the nod for SAC Player of the Week and her team win four straight.

No. 2 – Aminata Fall, Southern Nazarene
Fall continues her stellar career for the Crimson Storm and as a junior is averaging a double-double for the season, with 17.8 points and 14.7 rebounds per contest.  The month of February has seen the scoring average grow to 20.5 ppg over SNU’s last eight games.  She had highs of 35 points in a win over Southern Arkansas and 23 boards in a loss to Ouachita Baptist.

No. 1 – Lynette Holmes, Langston
The NAIA’s leading scorer proved worthy of that mark and more in a blowout win of the No. 10 team in the country.  Holmes recorded a double-double with 10 rebounds and an amazing 50 points.  She averaged 29.3 points through nine games in February and scored at least 30 in six of those.  Holmes also, deservedly, was named the NAIA National Player of the Week for her performance as well.