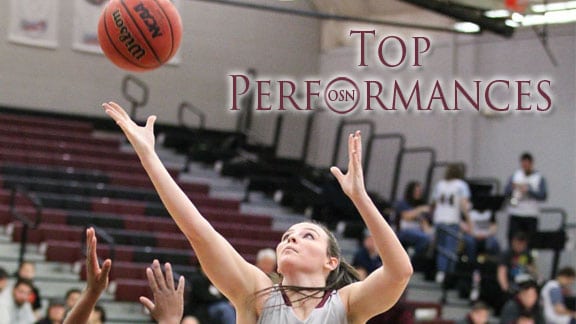 We’re already into February in 2015.  Here is a quick look back at the top 10 performances in women’s college basketball in the state.

No. 10 – Relina Johnson, Northwestern
The Rangers are starting to make some noise in the Great American Conference in their final season prior to getting to play in the postseason.  Johnson did her part against Southeastern with 14 points and 4-of-6 shooting from behind the arc.  The biggest three-pointer came with 4 seconds left and NWOSU trailing by one.  Johnson’s three gave her team the 69-67 win.

No. 9 – Brandi Leal, Cameron
The Aggies put together a five-game winning streak and are in second place in the Lone Star Conference at the midpoint.  CU got big-time scoring from the junior, who put in six three-pointers in back-to-back games and averaged 19 points for her team in the wins.

No. 8 – Grace Hadley, Southwestern Christian
SCU has put together a five-game streak as well and is moving up in the Sooner Athletic Conference standings.  Hedley, a freshman, led her team with 21 points and eight rebounds in an 85-82 win over Mid-American Christian.  The victory was the first of the current winning streak.

No. 7 – McKenzie Stanford, Oklahoma Christian
Stanford has stepped it up in the later part of the month.  She led her team with 25 points and eight rebounds as the Lady Eagles defeated Rogers State in Claremore.  It was the first road win of the yearend led to OC winning four of its last five to end the month with Stanford averaging 19.3 points per game in the wins.

No. 6 – Rateska Brown, Oklahoma City
Brown is making a run at the NAIA scoring title, putting in 20.50 points each night and is No. 6 on the national list at the end of January.  She matched a season high 31 points in a blowout win over SAGU and had five rebounds, five assists and three steals to go with the points.

No. 5 – Lynette Holmes, Langston
Holmes continues her climb back to the top of the NAIA scoring list, now at No. 5 with 20.56 points per game. The senior had 30-point nights twice in January – once in a win over LSU-Alexandria to go with 15 rebounds and the other came in the Lady Lions’ only loss so far this year at Wiley, along with 11 boards.

No. 4 – Ouleymatou Coulibaly, Oklahoma City
It was a big night for the Stars and the senior was shining brightly as well. Coulibaly pulled down 19 rebounds to go with 17 points for a double-double in the big win over St. Gregory’s , the 13th of now 15 straight.

No. 3 – Jessica Penner, Southwestern
Penner had 39 points in a win over Southern Arkansas and set a program record for most points scored in the NCAA Division II era, which was also the third most in GAC history.  She averaged 25.5 points and 12 rebounds in two wins during the week and connected on 19 consecutive field goals during that two-game stretch.

No. 2 – Alliyah Spatafora, Mid-America Christian
Spatafora nearly had a triple-double against Texas Wesleyan, with 13 points, 12 rebounds and eight assists.  Her 12 boards was a career high.  But the final two points with seven seconds left were the big ones because they were the two that put MACU on top for good in an 80-79 win over the Lady Rams.

No. 1 – Vicky McIntyre, Oral Roberts
Here is the senior’s stat line against South Dakota on Jan. 8: 19 points, 14 rebounds, six blocks, three assists and two steals. She has 15 double-doubles on the season and seven came in January.  McIntyre had TWO games with 22 rebounds, including a double-double of 20/20, scoring 21 points as well against IUPUI on Jan. 15. She closed the month with a 32-point, 17-rebound game at South Dakota.