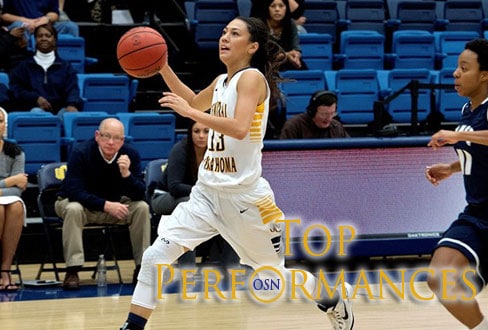 Basketball is now in full swing on all levels around the state.  Here are the top 10 performers and performances in women’s college basketball for November.

No. 10 – Nichole Tate, Oklahoma Wesleyan
Tate averaged 16.4 points per game in November, while shooting 55.3 percent.  The Lady Eagles were 8-2 during that stretch, including a seven-game winning streak.

No. 9 – Adrianna White, Southwestern Christian
White helped her team to a 4-4 record during the month.  She scored in double figures in all eight games and is in the top 20 in NAIA in scoring and total rebounds.

No. 8 – Lynette Holmes, Langston
The NAIA’s leading scorer last season, Holmes is starting to find her stride to retake that role.  She is No. 10 in scoring at the end of November (20.7 ppg) and tallied points in double figures in all six games during the month.  Holmes had a game-high 22 points in the Lady Lions’ 71-68 win over No. 1 Oklahoma City.

No. 7 – Dilan Webster, East Central
The senior showed up big in a 90-81 victory over Cameron.  Webster had 31 points, eight rebounds, six assists and two blocks for the Lady Tigers, who are now 4-1 on the year.

No. 6 – Jazzmine Robinson, Cameron
Robinson was named to the All-Tournament team at the Lady Buff Thanksgiving Classic.  She had 18 points in a 76-70 upset win over No. 8 Harding and followed that with a 31-point performance in a loss to Truman State.

No. 5 – Emily Williams, Southeastern
Williams has put up the most points in a single game this year.  The senior recorded 40 for the Savage Storm in the first conference game of the season, an 88-72 victory at Henderson State.  Williams was 13-for-13 from the free throw line and 12-of-18 from the field, including 3-of-4 behind the arc.  The Storm went 7-0 in November.

No. 4 – Alexia Kelley, Mid-America Christian
The senior ranks third in the NAIA in rebounds per game (11.7), as well as blocks per game (2.8).  Kelley has averaged a double-double through the first six games, in which MACU went 5-1, and scored win double figures in each game, shooting 45.3 percent from the field. 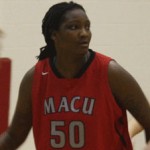 No. 3 – Aminata Fall, Southern Nazarene
Fall continues in 2014-2015 to put up numbers for the Crimson Storm.  The senior is averaging a double-double with 21.4 points per game and 13.4 rebounds per game (sixth in Division II).  Fall was one block shy of a triple-double, with 24 points and 16 boards in a season opening win over York.

No. 2 – Vicky McIntyre, Oral Roberts
McIntyre had a big-time double-double in a 73-60 win over Austin Peay.  The senior brought in 27 rebounds – setting a new ORU and Summit League record – to go with 22 points for the Golden Eagles.  Earlier in the week, McIntyre just missed a triple-double (22 pts., 12 reb., 8 blocks).

No. 1 – Chelsea Robinson, Central
Recording a triple-double seems to be the benchmark of this month’s list and one player did it.  Robinson had the game of her career against Arkansas-Fort Smith.  The senior put up 15 points, 16 rebounds and 11 assists, and all were career highs.  It is thought to be the first triple-double in program history.  She had a steal and a block also in just 25 minutes of court time.