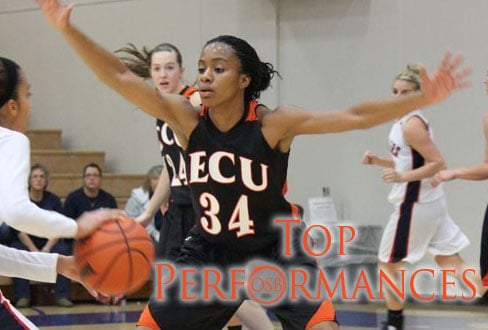 One month is now in the books for the 2013-2014 season and there have been some noteworthy performers and performances on the court already.  Let’s look at a few.

No. 10 – Katy Harsen, Rogers State
It’s been a rough start to the season for the Hillcats, who have dropped four since an opening night win.  But Harsen put her name in the record books with 27 points against McMurry. RSU lost 61-56, but the senior transfer from NSU accounted for nearly half her team’s points.  She shot 50 percent from behind the arc (4 of 8) and made 9 of 11 free throws.

No. 9 – Jazzmine Robinson, Cameron
The Aggies opened the season winning the first four games to give the program its first 4-0 start in 12 years.  Now at 5-1, CU has gotten strong production from junior Jazzmine Robinson.  The guard is leading her team in scoring and is second in rebounding.  She put in 17 points in the first half at Alva and snagged nine rebounds on the evening as well to help keep Cameron undefeated against Northwestern in the series’ history.

No. 8 – Oklahoma Christian Lady Eagles
It’s pretty cool when a team gets to put up 100 points.  It’s also pretty cool when all the players get to make an appearance in the game.  Take that scenario a step farther and have all 15 players not only score for the home crowd, but also each have at least one rebound, too, and it sounds like a successful game.  OC beat up York College, 108-60, and every player in a uniform got her name in the scorebook for more than just a foul, four players put up double figures and Roz Hamilton got a double-double with 10 points and 11 boards.

No. 7 – Aminata Fall, Southern Nazarene
Coming off an NCCAA national championship, the Crimson Storm have definitely had the target on their backs.  Aminata Fall has done her part, though, averaging a double-double (16.3 ppt, 15.5 rig) through seven games.  The junior has led her team in scoring in six of those contests and scored the game-winner on a putback shot with five seconds left over UT-Permian Basin, giving SNU the 68-66 win.

No. 6 – Autumn Lau, Oklahoma City
OCU has had a couple of blowouts to open the season, but the No. 2 ranked Stars needed all 40 minutes and a little more to defeat No. 15 Xavier and move to 3-0 on the season.  Senior Autumn Lau had 17 points and went 10 of 14 from the free throw line, her final three were OCU’s final points and proved to be the game winners.  Lau notched an impressive double-double on the night by hauling in 17 rebounds as well.

No. 5 – Southwestern Lady Dawgs
SWOSU went off on the Cotton Blossoms in Monticello, opening up the GAC portion of the schedule in a big way.  The Lady Dawgs dropped 118 on UAM, notching the most points for the program since its entrance into Division II nearly two decades ago.  The output for Southwestern, picked to finish second in the league, was also enough to break the conference scoring record.  All 12 players scored with nine logging seven or more points.  Four scored in double figures, led by Michelle Fisher at 21.

No. 4 – Alycea Price, East Central
The Lady Tigers have gotten off to a great start under interim head coach Emily Holbrook.  Senior forward Alycea Price has turned in impressive performances with consistency for her team, now at 5-1.  She has recorded three double-doubles in six games – already matching her team high mark from last season – and is averaging close to that for the season (12.0 ppg, 9.2 rpg).

No. 3 – Janell Beacham, Oklahoma Baptist
The senior is hitting more than 50 percent of her shots from the field and is second on the team in scoring  As a guard, Beacham is also leading the Lady Bison in rebounding.  No. 23 OBU is 6-1 in November (7-1 overall) and 4-1 vs. ranked teams.  Beacham’s importance to the team is underscored by her zero point, one rebound line in the box score in the team’s only loss this season.

No. 2 – Brittney Martin, Oklahoma State
The Cowgirls are undefeated through the first six games of the season and it’s hard to find a place or time that Martin is not active and dominating.  She leads OSU in both points and rebounds, while she is second on the squad in both assists and steals.  Martin closed out the month with back-to-back games resetting her career high.  She put up 22 against USC and then 31 on UMass-Lowell four days later.

No. 1 – Adaugo Osuala, Mid-America Christian
The Lady Evangels have won six straight for first year head coach Marcus Moeller and the MACU goes into the month of December and the SAC schedule at 6-1.  Osuala is leading her team in assists and second in scoring for her team.  In her team’s two closest victories, she accounted for the game-winning points.  Her two free throws at the end gave MACU just enough of a lead to hold off Tabor.  She then hit a shot with two seconds left to put the Lady Evangels on top of Baker to secure a 57-56 win.