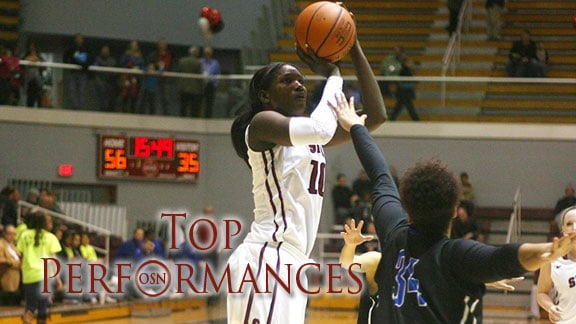 We looked at the men’s basketball Top 10 list yesterday for college players in the state of Oklahoma. Here’s our Top 10 list of great performances – both single-game and season-long – for the women.

No. 10 – Adrianna White, Southwestern Christian
White had a big game in the Lady Eagles’ upset of then-No. 11 Our Lady of the Lake, 79-63. She had 25 points, while not attempting a three-pointer, along with 18 rebounds, three assists and a steal.

No. 9 – Rateska Brown, Oklahoma City
The Sooner Athletic Conference Player of the Year and Newcomer of the Year set the tone early on as to what she might do during the season. In a four-game stretch in late November-early December, she averaged 28.8 points per game, shooting 51 percent from the field and 56 percent from the arc (25-of-45), while missing only one free throw. She had 5.3 rebounds, 2.8 assists and 4.0 steals per game in those four wins.

No. 8 – Emily Williams, Olivia Potter – Southeastern
In November, Williams recorded one of the two 40-point games in women’s basketball in Oklahoma this year. She scored 40 at Henderson State on 12-of-18 shooting from the field and connected on all 13 free throws she attempted. She attempted only four three-pointers and made three. Two nights later at Southern Arkansas, Potter would connect on nine three-pointers, a state high for the season. Both games were wins for the Storm.

No. 7 – Alliyah Spatafora, Mid-America Christian
Spatafora came very close to the elusive triple-double against Texas Wesleyan in January, with 13 points, 12 rebounds and eight assists. Her final basket with seven seconds proved to be the game-winner in an 80-79 SAC win over the Lady Rams.

No. 6 – Lynette Holmes, Langston
The senior had five 30-point games this season, including a 30-point, 15-rebound game in a win over LSU-Alexandria, in which she shot 80 percent from the field (12-of-15) and made her only three-point attempt. Holmes was seventh in the NAIA in scoring at 19.6 ppg and was named as a First Team All-American.

No. 5 – Jessica Penner, Southwestern
Penner’s 39 points in the Lady Dawgs’ 73-70 win over Southern Arkansas set a new scoring record for the program in the D-II era. Including the game prior – an 85-61 win over Ouachita, in which she had a 12-point, 16-rebound double-double – Penner connected on 19 consecutive field goals.

No. 4 – Jazzmine Robinson, Cameron
The senior had an all-around game this year and led the Aggies in points (18.1), rebounds (7.7), assists (3.4) and steals (1.9) per game. Robinson was an All-South Central Regional Player and WBCA Honorable Mention All-American and led her team to the NCAA Division II national tournament, the only D-II program, men’s or women’s, in the state to make it this year.

No. 3 – Chelsea Robinson, Central
There were only three triple-doubles this season in the state and Robinson had one of them, and it is thought to be the first one is program history. Robinson played in all 30 of the Broncho’s game, but her game against Arkansas-Fort Smith was the biggest. The senior recorded 15 points, 16 rebounds and 11 assists –  all career highs and all in one game – to go with a steal and a block, as well.

No. 2 – Aminata Fall, Southern Nazarene
Fall put up 43 of her team’s 71 points in a loss to Henderson State. The point total was the highest for a woman in the state this season, as well as being SNU and GAC records. She had 14 rebounds and four blocks along with the scoring. Fall opened her final season strong with a near triple-double, putting up 24 points with 16 rebounds and nine blocks in a win over York.

No. 1 – Vicky McIntyre, Oral Roberts
McIntyre was simply a force this season. She recorded 27 double-doubles, including a stretch of 14 straight. McIntyre also had TWO triple-doubles – the first was the first at ORU in two decades with 14 points, 16 rebounds and 10 blocks against Grand Canyon and the next happened in the Summit League tournament with 20 points, 18 boards and 12 blocks (a Summit League record) against South Dakota. She also set a school and conference record with 27 rebounds against Austin Peay. McIntyre, who led Division I in rebounds (15.8 per game) was recognized with Honorable Mention on the AP All-American list.