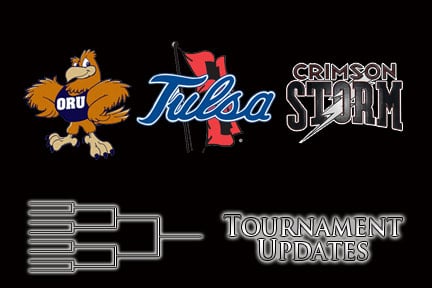 The Golden Eagles and the Golden Hurricane are going to the NCAA Tournament and Southern Nazarene has won another national title!

First trip to the NCAA Tournament since 2008, and of course, Kevi Luper was named the Tournament MVP.

Taleya Mayberry scored 100 points in the four games TU played and was named the Tournament MVP.

Annie Kassongo had 23 points and made the All-Tournament Team.  Aminata Fall was the Tournament’s MVP.

Shorter made a miraculous 3-pointer at the buzzer to force overtime.  Will Reinke fouled out late in regulation, and wasn’t available in OT.  Reinke had 20 points and was one of six Eagles in double figures.

Back and forth throughout, the game came down to the final seconds.  Michelle Fisher led SWOSU with 12 points.

Jermaine Bransford had a double-double with 16 points and 10 boards for the RiverHawks.

An 8-1 run for St. Mary’s late in the first half gave the Rattlers a lead they would not relinquish.  Craig Foster had 27 points for the Aggies.