Tulsa takes Skylar Diggins as No. 3 pick in WNBA Draft 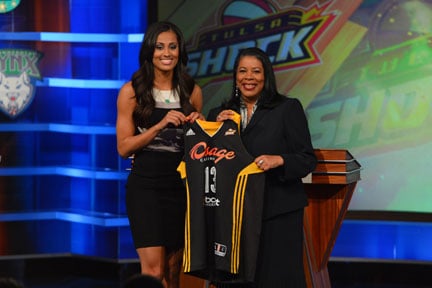 The “3 to See” in the 2013 WNBA Draft were selected in the order many thought they would be.

This allowed the Tulsa Shock to take Notre Dame guard Skylar Diggins with their first choice, the No.3 overall pick.

“I’m excited,” Diggins said.  “This is the happiest day of my life.  It’s a dream come true.

“You dream of this as a kid and as a young lady growing up playing basketball.”

The “3 to See” also included Brittney Griner, who was taken with the top pick by the Phoenix Mercury, and Elena Delle Donne, selected with the No. 2 pick by the Chicago Sky.

The WNBA Draft received national coverage this year by ESPN2 and ESPNU and Diggins spoke about the long day that she, Griner and Delle Donne had experienced culminating in the actual selections.

“It’s just a great moment,” Diggins said.  “You just enjoy these moments so much and it’s just the biggest night of our lives.  We have so much to be thankful for.”

Diggins led the Fighting Irish to three straight Final Four appearances and her name is listed throughout the Notre Dame record book, at the top of many of the categories.

She said that she believes she is coming into a good situation in Tulsa.

“I think Tulsa made some great moves in getting Nicole Powell and Candace Wiggins, and I hope that I can just go in there and have the same impact that I did at Notre Dame.

“I think that everyone has a sense of urgency and I think it’s going to be great.”

Diggins said also she knows that there will be pressure, but it doesn’t all have to fall upon her.

“Well, they have definitely surrounded me with great shooters in Powell and Wiggins. I think that (Tulsa head) coach (Gary Kloppenburg) understands that my strength is getting in a position where I can create for my teammates, and he put some great scorers around me.

“Kayla Pedersen can work the pick-and-pop really well and Glory Johnson runs the floor so well.  Coach Klopp has really put me in a position to be successful.”

Kloppenburg said that Diggins fits in well in the philosophy and the personality of this team.

“The thing that is so attractive about her as a player and as a person is her passion,” Kloppenburg said.  “She is a passionate player.  She hates to lose.  She wills her team to win and finds a way to do that.”

And he said that Tulsa should get ready for big things from Diggins, on and off the court.

“I don’t think Tulsa has any idea what kind of player that we’re getting in our market.  Her personality is just infectious and she is a great team leader.

“There are just so many opportunities for her out there and we have to figure out the right time and what the right things to do for her to move forward.”

Shock fans will get their first preseason look at Diggins on the court at the BOK Center on May 9, when Tulsa plays host to the Atlanta Dream.