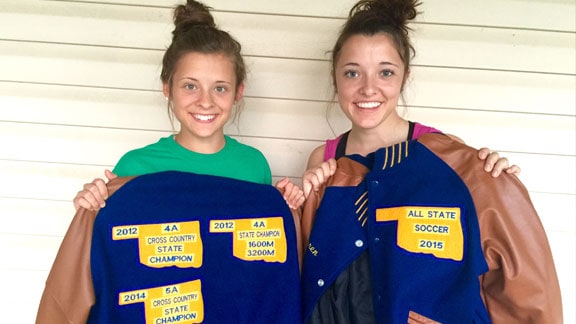 It is not uncommon for siblings to each earn all-state honors. But the number of times that happens goes down when those siblings have the same birthdate.

Now add to the premise that, between the two Lawrence sisters, they own all-state recognition in not just two, but three sports, and there are the makings of a rare event.

Born on April 28, 1997, twins Lauren and Sydney Lawrence graduated from Stilwell High School in May and closed out their time there making sure their names wouldn’t be forgotten soon. The two they were all-staters in cross country, track and soccer.

Sydney came to athletic prominence in her freshman year, winning both the 1,600 meter and 3,200 meter runs at the Class 4A state meet. She won cross country as a sophomore and senior to add patches to an all-state jacket she already owned.

Her final race at the state track meet last month ended in injury, but she is recovering from the disappointment and ready for the challenges that lie ahead.

The drive and determination to succeed was not limited to just one of the twins. Lauren is a gifted athlete as well and garnered the all-state honor this spring. 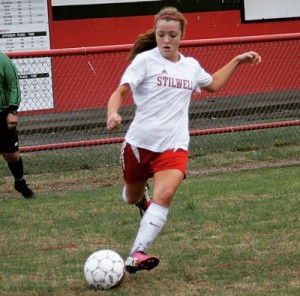 Lauren Lawrence capped her senior year as an All-Stater. Photo by Troy Littledeer.

Although the Lady Indians soccer team struggled this season, Lauren’s efforts on the field drew attention.

“We had a losing record,” Lauren said. “I’ve actually never lost so much in my life as I have this season. In the middle of the season, we were mercy-ruled by Mannford, and after that I just thought, ‘Man, this is really hard.’ I had never lost by this much in a game and it was really difficult.

“I did not think I would get all-state at all, so it was really a shock when I did.”

Lauren and the East All-State team have been practicing in Tulsa to take on their West counterparts on June 11 at Noble High School.

Sydney said she is proud of what her sister has done and glad that each has something athletically to celebrate.

“I think it’s really awesome because now we both have our own big accomplishments,” Sydney said. “It kind of stinks that they come towards the end of the year, because Lauren just got her jacket and she can’t wear it to school now since school’s out.

“It’s good just for people to know and our families and everybody to know that we are both dedicated and work really hard on what we do. And I think it really reflects on our parents as well and shows how great parents they’ve been and raised us to work hard and earn what we get. And I think we’ve done a pretty job reflecting the way our parents raised us.”

The two were active in many things at Stilwell. Along with their sports, both were involved in FCA and student council and Lauren also served as the water girl for the football team and manager and stat girl for the boys basketball team.

But the girls haven’t competed together in high school, last playing together on the basketball team in middle school and also in three-on-three soccer tournaments during that time. 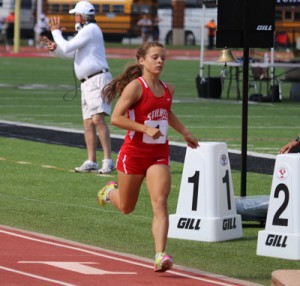 Stilwell’s Sydney Lawrence running at the state track meet. She earned all-state honors in both track and cross country.
Photo by Lisa Geissler.

“My mom has always wanted me to run cross country,” Lauren said. “Mostly to stay in shape, but also to get to do it with Sydney. But I’ve always found it better to stand off to the side and cheer her on. Because it’s always been a lot of fun watching her.”

They haven’t been put in a position to compete against one another, and according to Sydney, who is older by two or three minutes, that’s probably for the best

“I don’t know. I feel like it would be hard to compete against her. Because I don’t want to be the one that wins and she feels bad being on the losing team. Or it would be the other way around. It wouldn’t be fun either way. But if we were on the same team we could celebrate or mourn the loss together. I think that would be much better.”

Stilwell, the county seat of Adair County, also hosts the Strawberry Festival each year and Lauren was named this year’s Strawberry Queen.

And as nice as that is, Lauren and her sister find strength in what they do with the Fellowship of Christian Athletes. The organization on the Stilwell campus has grown during their time at SHS.

“When we started out in high school, FCA wasn’t very big,” Lauren said. “Only a few people went to meetings. It was kind of like just a club at our school.

“Nobody actually knew that it was statewide and even nationwide until about my junior year. I figured it out once I learned from an athlete I looked up to, an OU softball player, who was talking about how she was involved in FCA and I had no clue that she actually knew what it was. But now FCA has really grown in our school.

“Lots of kids come in not really knowing what they’re getting into. And they leave with a really great lesson that is student led most of the time. And we’ve gone from about 10 members to about 20 or 30 members in a session.”

Sydney and Lauren have developed not only athletically, but also spiritually and Lauren said she excited about what God was doing their classmates’ lives as well. 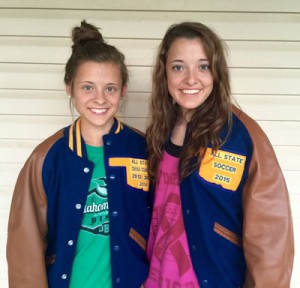 “And we went to a lot of FCA events, like a rally at U of A (Arkansas), and we also had rallies at our own school. Things like that and movie nights and it’s really a big group to us. They proclaim the gospel to student athletes. I really love FCA and what it stands for and I hope it continues to grow at our school.”

The girls are headed separate directions to college in the fall, but will remain within the Sooner state borders.

Sydney is headed to Shawnee and will attend Oklahoma Baptist and will study exercise and sports science in the physical training and strength conditioning field. With that training, she is looking at being a nutrionist or trainer. She will also be a part of the OBU track and field squad while there.

Lauren is going to Tahlequah to Northeastern State and said she wants to focus on her education and get a degree in biology to move on toward being a pediatrician.

Lauren also said it was exciting that she and her sister were experiencing this time together.

The sisters are the youngest of Larry and Pam Lawrence’s five children. And they are the second set of twins in the bunch.

Both agreed that they were thankful for the encouragement of their parents throughout their lives.

“I’m really glad because I know our whole town sees us as dedicated people to what do,” Lauren said. “And our parents always taught us to work hard at everything we do and to always give it our all. They’re always pushing us.

“Even though sometimes, we really didn’t like to hear them yelling, it’s always worth it at the end. It’s definitely worth it now.”