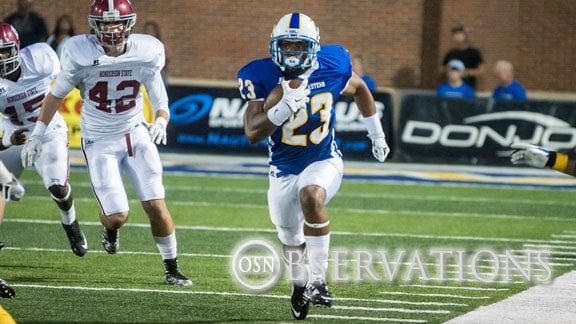 The M.O. comes on the heels of going to football games this weekend and not facing 100-degree temperatures.
And that made me happy.

Southeastern dropped its second straight contest to a team that was picked to finish higher in the preseason poll. And fans might think that is just the way it was probably supposed to happen.

But don’t sleep on the Savage Storm just yet. SE had many opportunities in the opener against Henderson State, but were hampered by penalties in the first half and lost by a touchdown, 23-16. The Storm matched scores at GAC preseason No. 1 and defending champion, Ouachita, but didn’t convert a PAT on the first TD and couldn’t get the two points on the last one that would have tied the game in the closing seconds.

It should also be pointed out that in both contests, the Storm had first and goal at key moments in each game and came away with no points either time. And that is a factor as well.

But if the Storm makes small adjustments to its track, there could still be many wins in the forecast this season.

A second college volleyball team in the state has opened the season with eight straight wins.

The M.O. highlighted Oklahoma Wesleyan earlier and is focusing on Cameron right now. The Aggies put four more in the win column, playing in the South Central Classic this weekend.

And one of the biggest observations about this team is the makeup of the roster with one senior, one junior, two sophomores – and 13 freshmen. OSN’s Player of the Week last week, Kat Evans, is the lone senior in the group and is putting up big numbers. But the youth on this squad has not yet seemed to have been intimidated at play on the college level.

Along the way, Cameron has logged wins over solid programs in Arkansas Tech and Harding, as well as in-state rival Southern Nazarene, also perennially good.

The Aggies are on the road at Texas A&M-Kingsville on Friday in the Lone Star Conference opener and then have five straight matches at home before a very tough four-game road stretch midseason that includes trips to San Angelo and West Texas A&M.

Midwest City looked good on Friday night for as long as the Bombers absolutely needed to. MWC scored the first 28 points and hung on to beat rival Carl Albert, 28-21, holding the Titans off in the closing seconds. The overall series record for Midwest City remains unscathed at 6-0.

Aliik Sezer was the headliner for the game and ran well in the early going, but the running back’s only score came when he blocked a punt, recovered it and ran in for the score.

In a win against CA and a loss to Booker T. Washington, the Bombers have shown signs of promise, but have given up big plays as well. This Friday’s non-district contest against Del City is the final tuneup heading into the games that really count.

The high school softball season is heading down the stretch and some teams in the state are making statements with win streaks.