Schedule adjustments according to weather 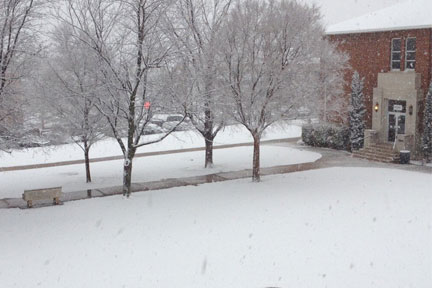 The No. 25 Mid-America Christian University Evangels will next be in action on Thursday night (Feb. 14) with a matchup against No. 10-ranked Oklahoma Baptist University Bison inside the Gaulke Activity Center.

Baseball games today have been postponed due to weather. Varsity hosts Hillsdale at 4 p.m. on Wednesday.  JV will travel to Bacone for a doubleheader at 1 p.m.

Due to cold temperatures and rainy to wintry conditions forecasted in Oklahoma Tuesday, No. 5-ranked Rogers State’s road baseball contest at Bacone College has been rescheduled.

The Hillcats (6-2) and Warriors will play Wednesday, Feb. 13 at Warrior Baseball Field on the campus of Bacone College in Muskogee. First pitch is scheduled for 2 p.m. – Roger State Sports Information

Due to inclement weather in the Shawnee area, Southern Nazarene and Oklahoma Baptist have canceled their contest.  Southern Nazarene will now open the Great American Conferene season Friday with a 2 p.m. game against Arkansas Tech.   – OBU Sports Information

Due to forecasts of low temperatures and expected precipitation, Northwestern Oklahoma State’s Tuesday home baseball game with Newman University (Kan.) has been rescheduled for 3 p.m. on Wednesday, Feb. 13.

This is the first postponement of a home game since the installation of synthetic turf on Glass Field at Myers Stadium prior to the 2012 season. – NWOSU Sports Information

Due to Tuesday’s heavy snowfall, Northwestern Oklahoma State’s home baseball game against Newman (Kan.) has been pushed back to 3 p.m. on Tues, Feb. 19.

The two teams were originally slated to meet on Feb. 12 but agreed to move the game back a day after weather forecasts called for cold temperatures and heavy precipitation. As of Wednesday morning, snow still blanketed large sections of the outfield grass on Glass Field, prompting a second rescheduling.

Northwestern (6-1) will open Great American Conference play this weekend when it travels to the University of Arkansas at Monticello (4-4). That series schedule has also been altered due to weather. The teams will now play a Friday doubleheader, beginning at Noon CST. The first of those will be a nine-inning game with a seven-inning contest to follow. The series concludes Saturday with a single nine-inning game, also starting at Noon.

SWOSU Baseball at Cameron on Tuesday has been postponed, makeup will be determined at a later date. – SWOSU Athletics Twitter

[Update] Tuesday’s baseball game has been canceled due to rain. Aggies will now play a doubleheader at Southwestern on Feb. 19. – Cameron Athletics Twitter

Due to rainy weather conditions expected for Tuesday, the East Central University softball games scheduled to be played against Northeastern State have been moved to Wednesday, Feb. 13.  Game time is still set for 1 and 3 p.m. for the double header at Lady Tiger Field. – ECU Sports Information

The East Central University softball games scheduled for Wednesday, Feb. 13 at Lady Tiger Field against Northeastern State have been cancelled due to the rain that passed through the area on Tuesday.

The teams will work to reschedule the double header at a later date.