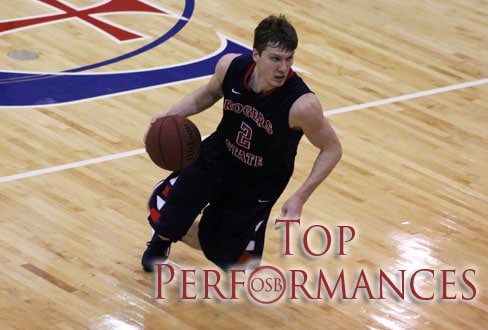 A couple of 40-point performances and game winning shots highlight our list for January.

No. 9 – Le’Bryan Nash, Oklahoma State
The junior had a career-high 29 points against the Mountaineers, leading OSU to an 81-75 victory over West Virginia and taking the season sweep.  Nash was 10 of 13 from the field and almost had the double-double as he pulled down nine boards.

No. 8 – J.C. Hartzler, Rogers State
Hartzler won the Heartland Conference Player of the Week for his performance in the first games of the month.  It’s the first weekly honor for the Hillcats in the new conference.  His effort for the week included leading his team to a 90-74 win over Dallas Baptist, in which he scored 26 points and was 6 of 6 from behind the arc.

No. 7 – Josh Gibbs, Central
Gibbs was also honored as Player of the Week for his league in that first week.  It’s the third weekly MIAA honor for Gibbs this season.  In UCO’s 81-77 road victory over Northwest Missouri State, Gibbs had game high in points (30), rebounds (14) and assists (6).  He is tied for fourth in D-II with 13 double-doubles and has led his team in rebounding in 18 of the 19 games played this season and led in scoring in 12.

No. 6 – Ryan Spangler, Oklahoma
Spangler’s performance in Round 1 of the Bedlam 2014 was big-time.  The sophomore posted a double-double, his ninth of the season and tops in the Big 12, scoring 15 and pulling down a career high 17 rebounds.  The former Oklahoma H.S. Player of the Year (Blanchard H.S.) gained a new fan base with his huge play in the national spotlight helping OU defeat OSU, 88-76.

No. 5 – Gary Inglett, Southwestern
Inglett is leading the surging Bulldogs in rebounding and steals, while he is second in scoring.  He put in the game-winning layup at Southeastern in the Dawgs’ 72-70 victory.  It was the second win of a six-game streak.  Inglett had a double-double on the night with 16 points and 10 boards.

No. 4 – Shawn Glover, Oral Roberts
Glover is back on the list this month as his strong season continues.  He averaged 22.7 points in January and has scored 20 or more in 15 of 22 games this year.  Glover put in the game winner with three seconds left at Incarnate Word., part of a team-high 24-point night.

No. 3 – Jahseth Lloyd, USAO
Lloyd’s first games this season for the Drovers started with the turn of the calendar and he has had an impact in Chickasha.  He has averaged 21.6 points per game and 8.2 rebounds.  And while he hasn’t attempted even one from long range, his conversion of the conventional three-point play with four seconds left in overtime was the difference in USAO’s 82-81 win over then-No. 24 Wayland Baptist.  Lloyd had a team high 24 on that night.

No. 2 – Bryton Hobbs, Northeastern State
January hasn’t bee kind to the RiverHawks, but there have been bright points.  One of those was the 40-point night Hobbs had against Southwest Baptist.  The senior was 10 of 18 from the field and made four three-pointers.  The point total was a career high as well as the nine assists he dished.  Go ahead and throw in five rebounds and 16 of 21 shooting from the free throw line for Hobbs’ all-around night.

No. 1 – R.J. McGhee, Oklahoma City
The Stars are at the top of both lists this month.  McGhee scored 42 points in OCU’s 97-89 overtime victory over Mid-America Christian.  He had the game-tying three-pointer to send the game to the extra session and then put in 10 of his team’s 20 points in overtime.  It marked the first time in nearly 10 years an OCU player hit the 40-point mark.