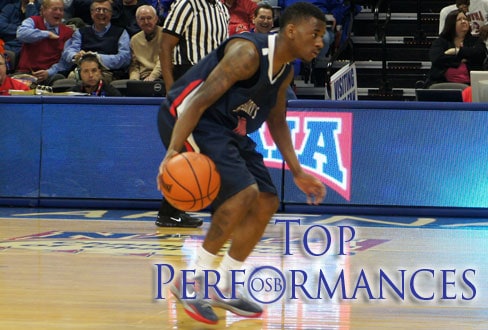 In honor of March Madness coming to a close tonight in Dallas – for the men anyway – and here’s the list of top performances for March in men’s basketball in Oklahoma.
(Actually, I’m a little behind in posting this month and this sounded like a good way to cover that.)

No. 10 – Craig Foster, Cameron
Foster and the Aggies came up just a bit short in the final home game of the season, falling to Midwestern State, 74-71.  But he put in 25 points on the night and had three assists as well, which put him into second place on the CU all-time assists list.  Foster, along with Will Cook, made the second team All-LSC team.

No. 9 – Marcus Smart, Oklahoma State
Smart ended his career at OSU without an NCAA Tournament victory, but it wasn’t for a lack of trying.  His final stat line in the tournament game against Gonzaga read: 23 points, 13 rebounds, seven assists, six steals and a block.

No. 8 – Taylor Smaller, Southeastern
The Savage Storm had lost seven of nine and had to have a win in the final game of the season to secure a spot in the GAC Tournament.  SOSU got the win, 83-80, over Harding (eventual GAC Tourn. champion) due in large part to Smaller.  The junior had six rebounds, five assists and 21 points, including two free throws in the final seconds to seal the victory.

No. 7 – Trey Jones to Josiah Campbell, St. Gregory’s
Jones and Campbell played significant roles in the Cavs’ run in the NAIA Tournament.  Jones came off the bench with big plays and averaged 13 points per game in the national tourney.  Campbell was a force on the inside, playing against bigger post players and out-hustling the opponent.  One of the biggest plays in SGU history will be in the closing seconds of the game vs. Freed-Hardeman.  Tied at 82 and with five seconds remaining, Jones took the ball the length of the court, drew in the defenders and dumped off to the waiting Campbell, who put it in for the score and the win, which sent SGU to the NAIA Fab Four for the first time in school history.

No. 6 – Bryton Hobbs, Northeastern State
The RiverHawks followed a minor upset at Washburn in the MIAA Tournament with a major upset.  NSU took down top seed (and eventual D-II national champion) Central Missouri, 84-82.  Hobbs had an all around performance with a game high 31 points, as well as nine rebounds and five assists, and what proved to be the game-winning free throws with 12 seconds left.

No. 5 – Quan Conner, Southern Nazarene
SNU went 5-1 in March.  Conner averaged more than 17 points per game during the stretch.  He also had the game-winning three pointer against NWOSU with 1.8 seconds left to open the month and 22 points, eight rebounds, seven assists and two steals against Roberts Wesleyan in March’s final game, which was a win in the NCCAA national third place game.

No. 4 – James Woodard, Tulsa
Woodard led the Golden Hurricane in scoring in the first five games of March , which included the three-game run through the Conference USA Tournament.  Tulsa’s C-USA title meant a trip to the NCAA Tournament for the first time in 11 years.  Woodard averaged 23.3 points per game through the tourney.

No. 3 – Aaron Abram, Oklahoma Baptist
The Bison had won a national championship more recently than they had an SAC tournament championship, making the post-season run that much bigger.  Abram played huge, averaging 18.5 points and 10.0 rebounds per game in the four games OBU played in the tourney.  Abram also started the month with a 41-point outburst at Oklahoma City.

No. 2 – Josh Gibbs, Central
Gibbs averaged a double-double for the season with 21.6 points and 11.1 boards per game and had 20 individual double-double outings in 30 contests.  He had 34 and 32 points in the first two games of the MIAA Tournament.  Then Gibbs had a 20-point, 11-rebound night against rival NSU in the semifinals in Kansas City and the game winning free throws to put his team ahead, 61-60, which went on to be the final score.

No. 1 – Marty Wilkerson, St. Gregory’s
As he had all year, Wilkerson was an offensive juggernaut in the NAIA Tournament, when he was on the court.  He averaged 23.8 points in the four tournament games for the Cavs.  Two times early foul trouble forced Wilkerson to sit through much of the first half.  But he made it up.  Wilkerson scored all 23 of his points against No. 2 Pikeville in the second half and put in 30 of his 32 points against Freed-Hardeman after the intermission, which were also 30 of the team’s final 39.  SGU finished the year at No. 6, the school’s highest ranking ever.