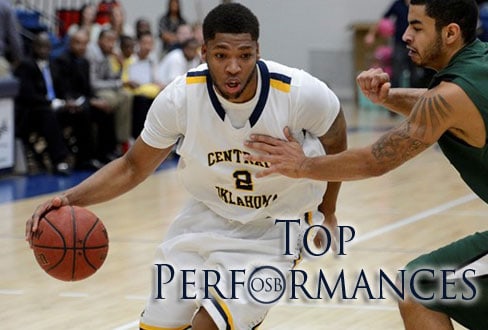 We took a look at top performers and performances in November in women’s hoops yesterday.  Today it’s the men’s turn.

No. 10 – Rod Camphor, Southwestern
After two losses to open the season, the Bulldogs rattled off four consecutive wins in late November, capped off by a thrilling 73-67 victory over former LSC rival West Texas A&M.  Camphor led his team in scoring with a personal and team season high of 27 points.  He shot 75 percent from the field, 67 percent from behind the arc, went 9 for 9 from the free throw line and connected on, not one, but two four-point plays.

No. 9 – Urald King, Southeastern
The Savage Storm opened the season on a four-game winning streak with King at the forefront.  The senior is leading his team in four categories: points, rebounds, steals and blocks.  King averaged a double-double in GAC play, helping his team to a 2-0 conference record for the first time in seven years.

No. 8 – Quan Conner and C.J. Smith, Southern Nazarene
The Eagles would split two early season meeting with Central, but made a scoring statement in the first round, beating UCO, 100-89.  Conner and Smith each 29 points apiece, a career high for each.  SNU made 14 three-pointers on the night.  Conner hit 6 of 11 attempts behind the arc, was 5 of 5 from the free throw line and had seven boards and four assists.  Smith connected on all three attempts from the three-point line and made 14 of 17 free throw attempts.  The Crimson Storm shot 48.3 percent from the field as a team in its first victory of the season.

No. 7 – Ryan Spangler, Oklahoma
The sophomore went for a double-double in his debut with the Sooners.  Oklahoma took down Alabama, 82-73, with Spangler pulling down big rebounds in the second half, helping OU secure and keep a lead over the Crimson Tide.  Spangler had 15 points and 12 rebounds in the first of two double-doubles so far this season.  He is also the current Newcomer of the Week in the Big 12.

No. 6 – Craig Foster, Cameron
The schedule has been tough for the Aggies early and won’t get much easier to start December, but Foster has been a bright and steady force in Lawton.  The senior is leading his team in points, assists and steals, while coming in third in rebounding.  Foster led his team in scoring in the two of the Aggies’ three wins in November.

No. 5 – Josh Gibbs, Central
The Bronchos are 6-1 on the year, but had to fight off a fiesty USAO team to start a 3-0 week on the final week of the month.  Gibbs grabbed 21 rebounds – the second time he’s done that this season – and 15 points to help UCO overcome  a 58-50 deficit late in the game.  The senior is averaging a double-double for the season, leading his team in scoring (21.6 ppg) and rebounding (14.7 rpg), and was named the MIAA Player of the Week twice in November.

No. 4 – Shawn Glover, Oral Roberts
Glover was expected to carry a significant part of the load in his senior year.  But with the loss of Obi Emegano, he has stepped it up that much more.  Glover was the leading scorer for the Golden Eagles in the last four games of November and increased his scoring total as the run continued.  ORU took the Mayan Division title of the Cancun Classic.  Glover averaged 25.5 ppg in wins in the tournament and was named the Southland Conference Player of the Week for his efforts.

No. 3 – Bryton Hobbs, Northeastern State
Hobbs had a big double-double in the most exciting win of the season for the No. 21 RiverHawks.  NSU trailed Harding by seven with 24 seconds left, when Hobbs gave his team the opportunity to snatch a victory.  He was 6 of 6 from the free throw line in the next 15 seconds of game time and put NSU within one and in the position to win on the  midcourt shot from teammate Marcus Sheppard that touched nothing but net as time expired.  Northeastern State won 66-64 on the strength of what was nearly a triple-double from Hobbs – 28 points, 10 boards and eight assists.

No. 2 – Marty Wilkerson, St. Gregory’s
The Cavaliers are off to an 8-0 start for the first time since joining the NAIA, due in no small part to the play of Wilkerson.  The junior is not only averaging 22.6 ppg, but also is leading his team in assists.  Wilkerson hit a last-second three-pointer to beat No. 24 Our Lady of the Lake, 87-84 (the first of two wins against the Saints this season).  He had a game-high 24 points in the win, as well as 11 assists.

No. 1 – Marcus Smart, Oklahoma State
There couldn’t very well be a list of top performers in the state without including the best player in the state (apologies to Durant and Westbrook).  Smart led his team through the month of November with a 7-0 record and a No. 5 ranking.  But his performance against the Memphis Tigers left even the aforementioned Durant appreciative of his talents.  Smart had a career high 39 points, as he shot better than 50 percent from the field and was 5 of 10 from behind the arc.  And like Foster, he is leading his team in scoring, assists and steals and third in rebounds.