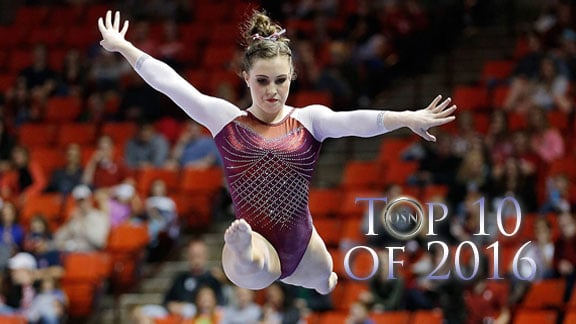 The Oklahoma Sooners women’s and men’s gymnastics teams will head into 2017 as the preseason No. 1 teams in the country. And for very good reason.

Each team won the national title in 2016.

The men’s team took home its 10th national championship in program history, winning by more than nine points over second place Stanford, 443.400-434.050. The goal to ‘Defend the 10’ was successful and the Sooners finished the season undefeated.

And coach Mark Williams was (again) named the Mountain Pacific Sports Federation Coach of the Year, and led the U.S. Men’s Gymanstics team this summer in Rio.

The women’s team won the national championship for the second time in program history, and it marked the second title in a three-year span. OU (38-1) distanced itself from runner-up LSU, 197.6750-197.4500.

They ‘Made It Count’ and along the way earned a program-record 18 All-America honors, with junior Chayse Capps claiming five of them.

It is also the first time one school has won the women’s and men’s titles in the same season.